GREENSTAR is an India based, LED luminaire manufacturer. At GreenStar we design, test and manufacture high quality, eco-friendly and cost saving luminaires for worldwide distribution. The majority of our current product portfolio is focused on the most challenging segment of the lighting market; specification grade outdoor luminaires that are used by utilities and municipalities. Our chosen market segment focus and product offering are central to the smart city initiatives that are currently being developed.

Our product portfolio is expanding in the areas of luminaire based transceivers, sensor integration, secondary distribution circuit intelligence and hardware protection. We offer a total value proposition that other major lighting brands simply cannot match.

GreenStar operation was established with concept of R&D center in India and serve the world. Therefore apart for standard product range offering GreenStar has been providing solutions based on customer need.

Energy efficient technologies and design can cut energy costs dramatically; these savings can eliminate or reduce the need for new generating plants and provide the capital for alternative energy solutions for populations in remote areas 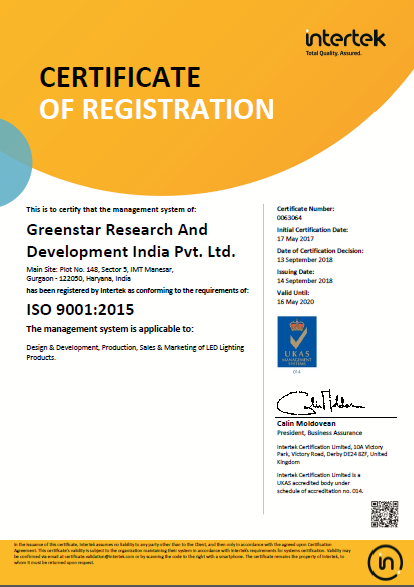 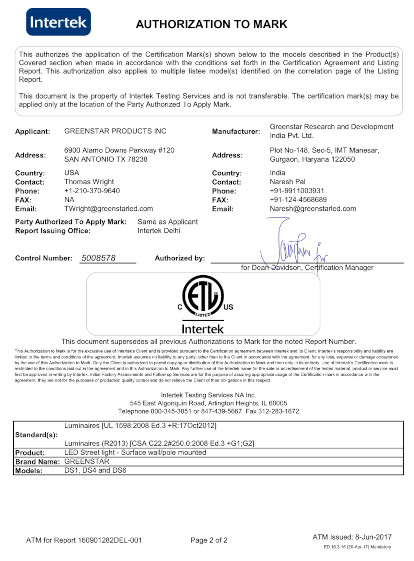 Founded in 2009 GreenStar Research & Development India Pvt LTd. Had been an engineering arm to is its them parent company (till 2020) M/s GreenStar Products Inc., based out of San Antonio, Texas.

GreenStar in India played a key role in supporting its USA counterpart in becoming a global manufacture of customer specified LED Street and roadway light with over 1 million global installations.

In 2011, GreenStar in India supported its USA counterpart to secure and win the first tender of 25,000 LED street lights with CPS Energy and began replacing the city’s existing high-pressure sodium streetlights with LED CPS Energy is the largest municipally owned electric and gas utility service provider in the United States.

In 2014 GreenStar in India played a key role with its USA counterpart to fulfil the desires of Chalco, Mexico City in modernizing the municipal public lighting services by replacement of existing LED luminaires.

for high efficiency, have a longer life and are environmentally friendly and provide over 60% energy savings.

The city of Iquique was looking to install lightingon the highway between the citieof Iquique and Alto Hospicio to increase visibility at night on their roadways.At that point in time There were no electrical lines available to install metered lights and the installation cost to bring power to the highway exceeded the city’s budget

To solve this issue, 3200 GreenStar LED solar Corona units were installed along the highway along with batteries strong enough to provide lighting in the event of 4 days of no sun.

In the Year 2018, the city of San Antonio wished to improve energy efficiency and reduce its carbon footprint by installing energy efficient GreenStar LED roadway luminaires as against the outdated high-pressure sodium lamps,so as to target for a savings of 60% in energy costs. Since GreenStar LED luminaires have a rated life expectancies of over 100,000 hours, they require little to no maintenance and the city expected to have additional savings in operation cost too.As on date Over 150,000 GreenStar LED luminaires have been installed in San Antonio.

Provide all power needed to operate the irrigationsystem for 45,000 hectares. Provide energy efficient security lightingfor the ennte agricultural region. Direct impact on approximately 998,000 people living and working in the region.

World energy consumption has risen 45% since 1980 and it is projected to be 70% higher by 2030. The strategy of GreenStar is simple: Make Energy Efﬁcient products and deliver excellence.

GreenStar guarantees energy cost saving through its efﬁciently designed products in different applications. Greenstar products can help in energy savings up to 65% or greater. GreenStar products lower the operating cost through optimum power consumption and minimizing maintenance cost by using quality material. In summary GreenStar provides the most versatile and cost effective lighting solution available in the market today.

A MAKE IN INDIA COMAPNY

GreenStar is serving the nation by making all the products at its facility and by developing almost all the parts & components at Indian suppliers with the concept of “Make in India”. Our products are designed and developed within India and certify to meet both Indian and global standards.

GreenStar prides itself in establishing long term partnerships with our Indian component manufacturers & suppliers with 100% traceability and certiﬁcate of conformance for the procured parts & components.

Customer satisfaction is the prime objective of GreenStar. Our products are assembled in semi- automated assembly line by trained operators and assembled with utmost care to deliver the best quality. Products are assembled to order speciﬁcation assuring that the newest components are used. At GreenStar we take great pride in the quality we deliver. No compromise is made right from material purchase to supply of ﬁnish goods. We follow industry highest standards for quality.